Did you know that eating less the easy way can be done by using external cues as instead of will power?

Have  you fallen off the wagon recently, and got into some bad habits? Would you like to be eating less but it seems
impossible right now? Have you got the willpower – but it’s actually the won’t power that you need?

Are you feeling a bit off par? Do you want to get back on track? Do you know that if you leave things unchecked, you’re on a rocky road (and I’m not talking about the chocolatey biscuit cake) to poor health?

If you’re not on point right now, it’s possible that your blood sugar is a bit off kilter, that the microbes in your gut are out of balance, your blood sugars are elevated and your energy levels are low.  In the main, its probably true to say that feeling sluggish and wanting to make changes has been brought on by your current lifestyle – the decisions you have been making about what you choose to eat, and the exercise you have (or haven’t been) taking.

Here at Team Raw Energy we’ve come up with some simple strategies for you to eat less – and they’re not what you think. What we’re going to share with you is kind of sneaky but effective (and scientifically tested), and (the best bit)  – simple to do. Just the way we like it! We’ve found some evidence that changing the environment and external cues will help you to eat less. And you don’t need willpower for that.

So that you don’t have to sift through all the research, we’ve come up with 10 top tips so you can be eating less the easy way.

1. Move the snacks away from where you work/sit – even if they’re at someone else’s desk, you leave them in your car, or put them in the kitchen, studies show that you will eat less if you have to go get food because the act of going for it gives you a moment to decide if you really want it. So get the food away from your desk.

2. Put food  in containers you can’t see. When someone brings snacks into the office, studies revealed that people ate less of them if they were in a container you couldn’t see through (as opposed to, say, clear plastic). We thought this was odd – but it’s been successful in studies, so give it a whirl!

3. At dinner time, serve the main part of the meal straight onto plates and take to the table. Women ate 10% less
and men ate 29% less than when they served themselves  from bowls on the table. If this is a big change – put the vegetables and salad on the table only – it’s OK to eat more veggies!

4. Find someone who eats slowly and sit next to them! Studies found that people mimick each other. Sitting next to someone who eats slowly means you will eat less and match their pace, which will be good for digestion. People also ate faster when they were on their own, so find a lunch buddy if you can, even if its a couple times a week!

5. Smaller plates, bowls and mugs work. Using smaller sized food containers will mean you eat less but feel as satiated. One study gave people an auto-refillable bowl of soup and they ate on average 73% more in one sitting. It’s all about fooling the brain.

6. Don’t be fooled by so-called healthy food.  It might be labelled healthy – but could have a ton of calories. Just
because it’s organic or it has lettuce in it – doesn’t mean it hasn’t got any calories!

“they believe that since they’re eating something that isn’t as good as the real thing, they deserve a little bit more. In our studies, the average person believes that a low-fat version of a snack has 40 percent fewer calories. People think they’re being tremendously virtuous so they overeat. In reality, we found that snack foods that are labelled low-fat average only 11 percent fewer calories than the regular versions.”

7. Don’t fall into the intelligence trap.  What we mean is that you’re smart, so you will rationalise the reasons for 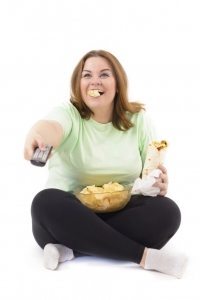 what you are going to eat (especially if it’s not healthy) – and will often decide that you ‘deserve a treat’ – say you sit infront of the TV on a Friday night and eat crisps from a large (see through) bowl, right on your lap – because you deserve it.

Team Raw Energy would like to suggest that you get treats for yourself that are NOT food.

Using your phone apps to get distracted from eating can be used as a reward. Make a’ treats/rewards’ Amazon list for small things that you would like, or you can watch a you Tube Video, or send a nice text to someone; read a chapter of a book, or even make a call. Label these things your guilty pleasures instead of food.

8. Stock your cupboard with healthy things at the front. You are much more likely to eat that in a snack emergency, than if you have to dig around at the back of the cupboard for chocolate. We’re a bit lazy you know.

9. Buy food in mini packs. If you’re going to have snacks, try and buy them in smaller sealed packs. You’re much more likely to get ‘one pack’ of biscuits out if they’re in a pack of two, and you will eat only two, than if you get the whole packet out. Yes, it might be a bit more expensive, but your health has no price tag.

10. Add up all the small wins then step back to see your achievements – a 1% change in any area is better than none. When you add up using  smaller plates, smaller containers, things wrapped in smaller packets, food further away, or at the back of the cupboard it’ll be a big win as a total. Watching that fantastic TED talk instead of eating sweets as a treat, putting only the vegggies on the table, reading the labels, and finding a friend who eats slowly are all simple to execute and go a long way to your success.

These are all going to be much easier to try than say, telling yourself you will eat less, eat more slowly, and use willpower.  You see, what’s really interesting in this study is that they took the concept of ‘mindful eating’ – eating slowly, chewing every mouthful, quietly etc etc and tested it out. This is their take on it:

“This whole idea that you can prevent mindless eating with the power of your mind is a tremendous fallacy.  ………..  if you’re 95 percent of the population. To eat half of a pea and ask, “Am I full yet?” may work for some people. And I know calorie counting and pre-portioning works for some people.

But for most [ ], our lives are way too chaotic to accommodate that. We have screaming kids running around the table, a to-do list before dinner that’s 40 things long, we’re thinking about how things went at work that day, how they didn’t go how we wanted.”

So instead of trying to do the impossible, try out some of the suggestions on this list to do the possible. After all, it’s not supposed to be no fun!

For more tips on sustainable weight loss, sign-up for our Healthy Habits newsletter:

SIGN UP
Get a Regular Dose of Insights into your Inbox. Sign up for "Healthy Habits"
It's the little things you do, day after day, that makes all the difference to a healthy and successful life.

“There’s nothing you can’t do if you get the habits right.”
- Charles Duhigg
Your information will *never* be shared or sold to a 3rd party.
We use cookies to ensure that we give you the best experience on our website. If you continue to use this site we will assume that you are happy with it.Ok